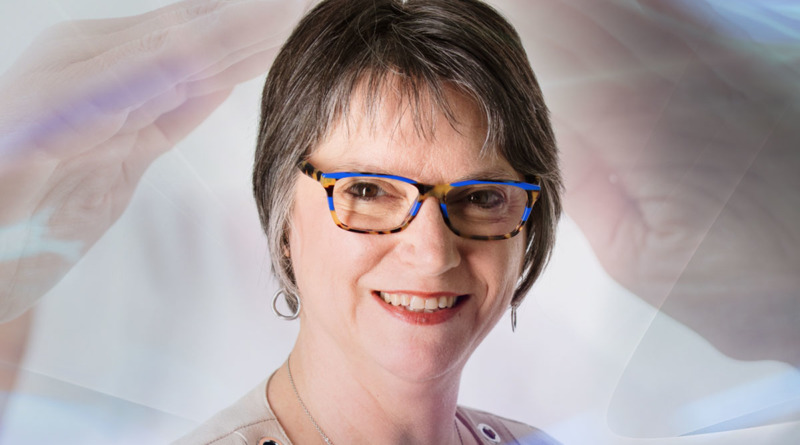 With your eyes closed, giving in to her calmness and serenity, you soon feel lighter. It’s as though she were opening the doors to each of your chakras and filling them with love and well-being. In fact, that’s exactly what’s happening. Chantal Pèladeau has a gift for making you feel better, for bringing you in harmony with your body and mind through her energy work. She is a reflexology therapist and Reiki Master.

Chantal has been practicing this Japanese method for the past two years, after spending 31 years as a teacher. She treats a loyal and growing clientele at Centre Zen Plus, in Saint-Pascal-Baylon. In 2017, preparing for retirement, she embraced this new technique because of her love of energy work.

“There are certain principles of life to which I am very committed. Reiki brings me the power of light, confidence and well-being.”

Reiki, which means energy, or universal force, is a non-traditional method that originated in Japan, and is based on hands-on energy care. It was founded by Mikao Usui based on a mystical revelation he had that led him, in the late 19th century, to receive the keys to healing.

The goal is to restore a vital energy that unites all living beings and circulates throughout the invisible version of our body. As a rule, Master Reikis transfer their inner energy to the outside by placing their hands on specific parts of the patient’s body to restore the energy balance.

The aim is to improve the patient’s physical, mental and emotional state. This can help address issues of depression, exhaustion, migraines, insomnia, anxiety and chronic illness, among others. Reiki can accelerate the body’s natural capacity to heal.

“I am a channeler. That too is part of the routine: giving myself Reiki. The classes I took initiated me to that. Everybody can do it for a few minutes a day, even while driving and walking. Everything goes through thought, intention and visualization,” notes Chantal.

She completed the first two levels of Reiki with Darquise Leduc in 2017. A year later, she became a Reiki Master in the Usui Shiki Ryoho natural healing method of Joanne Leclair.

Reflexology is a natural therapeutic method based on the principle that the feet and hands have reflex points that correspond to the different parts of the body. Tension is relieved in those parts by applying pressure to the corresponding points. That improves circulation and helps the body function better.

Already as a child, Chantal, who was born in Alfred-Plantagenet, could see energy circulating around her. Looking back, she realizes that she always knew that she could help. I wanted to help people. “They used to say that I had a direct line to God,” she smiles.

Close to her high school in Plantagenet, there was a home for people with developmental disabilities. When she was in grade 12, she often stopped by just to help.

This experience most certainly had an impact on Chantal, because she chose to study education techniques for people with developmental disabilities at Algonquin College. She was enrolled in that program for two years, even though she still didn’t know which way to go next.

“So I decided to sign up for a certificate in missiology at Saint-Paul University. I loved that year. I felt that it was important to understand this aspect of missions.”

In her early 20s, she went on a two-month mission to the Dominican Republic with Ottawa’s Sisters of Sainte Marie de Namur. “We were there just to observe, to share their day-to-day existence with them.”

Upon her return to Canada, she got a job at L’Arche in the National Capital Region, working with people with developmental disabilities. “I lived there, along with two other workers, but I couldn’t see myself living in community for any length of time.” She stayed for a year, and decided to go back to school to get a bachelor’s degree in religious studies and history. “My mother wondered when I would finally settle down,” she laughs.

Her mother’s wishes eventually came true because, after getting her degree, she entered the world of education to teach grades 1 to 8 for 31 years. Her lucky students got initiated to meditation, which she already practiced at the time and shared with them.

Seven years after completing grade 12, she married her high school sweetheart, Louis Houle. Intent on having a family, Chantal was shocked to find out that she was unable to conceive. The couple had so much love to give, that they decided to adopt. “Our first son, Mendel, came to us at the age of 3 months. He came from Prince Edward Island. When we were ready to adopt a second child, we found the bridges to that part of Canada closed when it came to adoption. As well, the adoption process in Canada is so long and complicated, that we turned to Haiti instead.”

That led to the adoption of 5 month-old Myriam. And as if that were not enough, the couple brought over 2 year-old Simon-Olivier from Cambodia. “We wanted them to be different from one another so that none of them would feel excluded if the other two were from the same country.”

The young parents bought land in Saint-Pascal. They built a nice big house for their family. “I remember when we bought the land, there wasn’t a single tree. It was as though it had been abandoned. So my husband started planting trees. Today, we have a huge forest surrounding and protecting our home.”

Chantal and Louis can be proud of their work. Mendel, the oldest, who will soon turn 30, just finished his doctorate in French literature, and is thinking of writing a thesis. Myriam, 26, is an educator, and the baby of the family, Simon-Olivier, 24, is attending university and thinking of going into education.

Chantal Péladeau has always known what she wanted to spread in the world. She radiates love. Surrounded by her forest, she often loses herself in it to connect with nature, re-energize, meditate and pass on to others all the treasures she draws from it. Sharing and giving of self sums her up very nicely.