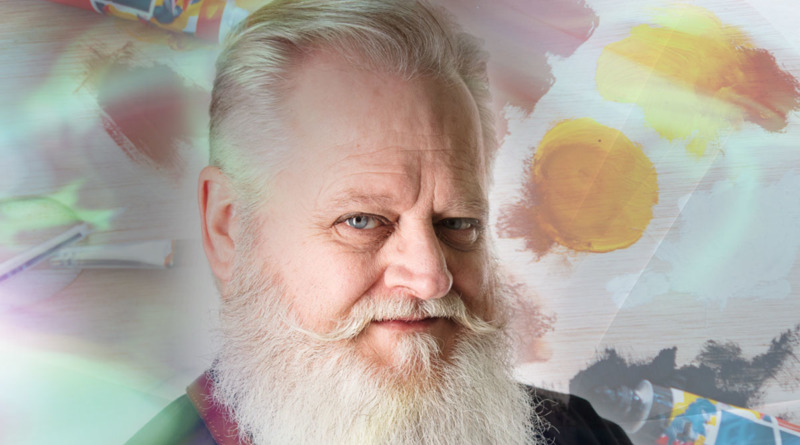 Hooked even before he was born. Bernard Lévesque, artist-painter, sees life’s many hues.

A popular figure in Rockland, Bernard Lévesque is warmly greeted everywhere he goes. This was certainly not something he ever expected as a kid growing up in his little village in New Brunswick. All he ever wanted to do was paint nature and all the beauty it had to offer. Bernard teaches oil painting and drawing to students of all ages in his studio. In fact, on September 20, he will be celebrating the 20th anniversary of Studio Art Plus.

An active member of Eastern Ontario’s artistic and cultural community, he specializes in oil painting and drawing. For more than 30 years, he has been contributing to the region’s artistic landscape through public art projects in Vanier, Overbrook, Orléans and Clarence-Rockland.

Bernard provided the cover page illustration for Raconter l’Est ontarien, which had its official book launch on January 31 at the Le Chardo restaurant. He has more than a thousand paintings to his credit. This is a retrospective on the man and the artist.

The seventh of nine children, Bernard spent his first 12 years in the Atlantic provinces. When Bernard was still in her womb, his mother used to paint the superb surrounding landscapes. This might account for his early passion for this medium. You could say that he was born with a paintbrush in his hand.

For sure, he has an innate talent. When he’s painting, he is in another world.

“I travel, I take off, I let my imagination soar. I commune with nature, which I then spread on my white canvas,”

Like his mother, he likes to capture the many subtle hues of nature on his canvases.

On his door hangs a sign that reads: Studio Bernard. “I wanted to be an artist-painter, that was my path, I couldn’t see myself doing anything else,” he remembers. The visualization worked, because years later, he got his studio!

From the early 60’s until 1970, his father was often away. A die-hard politician, he served in Fredericton for the Liberal Party. When Bernard was 12, his father was transferred to Ottawa. The whole family packed up, leaving behind New Brunswick’s villages, valleys and beaches, and the Atlantic Ocean, to settle in a bustling metropolis. It was a shock for his mother, but everyone ended up adapting to their new life.

After finishing college, Bernard studied commercial art. “My father wanted me to become an architect,” he recalls. “But I wanted to do something more artistic.” Bernard was on his path to become a graphic artist.

Armed with his diploma, he launched into his new career. “I loved the artistic side of my work. I also had a rather strong affinity for the business side,” he admits.

Things changed quickly in the world of graphic arts over the next few years. “I really wasn’t keen on computers. I preferred working with my hands. So, I started moving up the ladder to head up the design department. I let the computer work to the young ones,” he grins.

Every summer after they moved to Ottawa, Bernard and his family would return to their little corner of the world in New Brunswick. When he grew up, he kept up the tradition. One summer, he bumped into his childhood sweetheart. He and Myriam were only six years old when they started doing everything together. “She was actually the one who taught me to skate,” he remembers fondly.

A while later, Myriam followed Bernard to Ottawa and moved in with her beloved. Now that they were finally together, they could start thinking about making a family. They had two children, Karine and Julien, both of whom inherited their father’s artistic side.

In 1985, the Lévesque family moved to Clarence-Rockland. “This was where we wanted to bring up our children. We wanted to give them the same quality of life that we had enjoyed in New Brunswick when we were young.” Both kids have made their parents proud. Karine, who studies art history, works at the Shenkman Centre. “She gave us the beautiful gift of a granddaughter, Emma, who is now two and a half years old.” Julien, for his part, is painting and making a career in the theatre.

In 2000, Bernard did a 180-degree turn. He opened his painting studio in Rockland, so that he could mentor more people, mainly the younger ones. “I love teaching young people. They catch on quickly. I get such a kick out of instilling in them the love of art and its benefits.”

The studio started out in the Centre culturel Ste-Famille, and then moved to the Club de golf Outaouais for a while. But for the greater part, it has been located in the double garage of the family home in Clarence Creek. True to its mission, the studio exudes serenity, creation and imagination.

Despite all of his dedication to his passion, Bernard sometimes takes a break to renew himself. That’s when he turns to gardening, where he gets to reconnect with nature, a special way to return to his roots and values.

But that’s not all. Day after day, students eagerly await him. It’s simple really. He drives a school bus and takes his responsibility seriously, but with a sense of humour that makes his young passengers eager to travel with him. “I have pretty busy days. At 6 a.m. I pick up kids, at 6:30 a.m. I get home and give classes until 1:00 p.m., and then head out again at 3 p.m. to drive the kids home, and then give classes again from 6:30 to 9:30 p.m.”

You could say he’s a busy guy! And you’d have to know that there’s nothing he loves more. It seems that in everything he does, Bernard has the gift to move people, even the most sedentary ones. He manages to transport people to a fresh universe, to reveal the beauty and love of everything around them. When all is said and done, Bernard Lévesque is more than an artist-painter. He is someone who dedicates himself to serving others, and when your path crosses his, he marks your life.