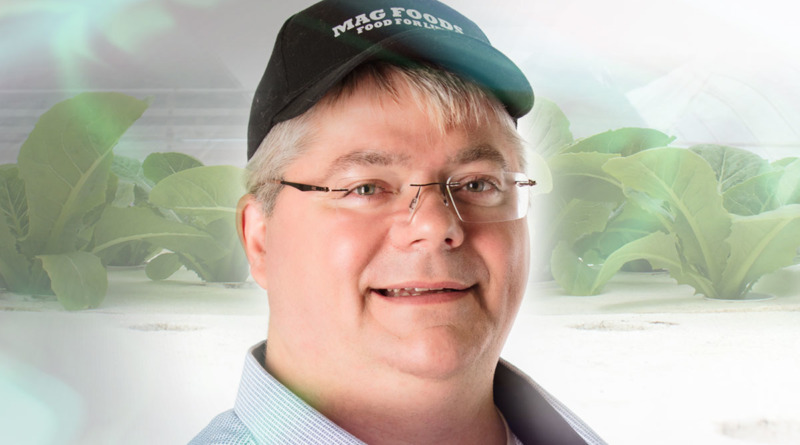 AT THE SERVICE OF NATURE

Frédérick Miner was just a kid when he fell in love with nature. So it’s hardly surprising to find him these days playing with plants, fish and vegetables. But with a few twists. This French-Canadian resident of Curran has found an innovative agricultural practice: aquaponics.

Where it all started

Flashback to the 60s. A quiet kid, Frédérick already had a green thumb when he was just knee-high to a grasshopper. Originally from Hawkesbury, he grew up on his grandparents’ three-acre farm. They soon instilled in him a love of the earth, and before long he was completely captivated by the charms of that universe, of that freedom.

“Watching a seed grow into a solid plant became a passion. Witnessing something so small come to life is a fabulous experience.”

Watching that spark grow without pesticides and nourished by organic fertilizer was to him the right way, giving every vegetable in the garden the chance to develop its very own personality. “Vegetables that grow without pesticides are all different. They look different from one another, they have their own characteristics,” explains Frédérick. “Pesticides make them all identical, and that’s not normal.”
Frédérick very quickly grasped the complexity as well as the extraordinary connection between a seed, water, earth and the human being in charge of keeping all of the plants healthy. “Plants feed us,” he adds, “and it is up to us to understand what they have to offer us. We are the caretakers.”

Frédérick remained steeped in that joy and those natural riches until his teens. At that point he gently took flight, dropping out of school in grade 10, and at 18 marrying Guylaine, his childhood sweetheart. They grew together, side by side, making a home in Hawkesbury. “I knew that she was my soul mate,” he says tenderly. “And so it remains today.” Like all couples, they had their ups and downs, but nothing could break them apart. Out of their love, four beautiful children were born. “We found our place,” he exclaims proudly.
His first job paved the way to becoming an electrician. He spent a few years in that field, and then moved on to robotics and the foundry sector. “I learned a lot about steam, and somehow it stayed with me, even though I had no inkling at the time that some day I would use that knowledge. It was only later that I connect steam and aquaponics.” For someone as much in love with life as Frédérick, it is important to always keep an open mind. He knows that everything happens for a reason, and you have to think outside the box.

When life throws you a curveball

In his mid-twenties, he felt the need for a career change, and moved into residential and commercial insulation. With his experience and desire to be his own boss, he started a business and ran it for 10 years. But a twist of fate forced him to give it all up in 2006.
While in Kingston, he was bitten by a tic. He got lyme disease, his body ceased to respond, and the symptoms slowly got the best of him and robbed him of his life as he knew it. He could no longer get around, he suffered chronic fatigue, and was in terrible pain. “I lost my sense of smell and all sensation in my hands. I have to look at what I touch because I can’t feel a thing.” His legs and feet are always numb. After that unfortunate event, he could only hobble around with a cane. “But since 2019 I have finally been able to get around without a cane.” Frédérick changed his diet and returned to the source by eating only organic.

No longer able to do any physical work, he had to reassess his future and his family’s. He started doing research in the area that he loves, which is gardening. “We always need food, so why not start growing our own? But not outside. Inside, sheltered.”
He ended up spending the whole winter in his little garage attached to the family home growing vegetables. He realized that there was real potential here. His harvest was bountiful and beautiful. So he and Guylaine decided to buy a house on a property where he could build a greenhouse. He wanted to create something. After extensive research, the couple found a house on an acre of land. The family took the leap, and the Miner clan moved to Curran, right next to Bourget.
That was the start of a new beginning. He researched ways to combine aquaculture and hydroponics. He found a whole new world of gardening. Instead of working the soil and being at the mercy of Mother Nature, he grew his vegetables in a closed system of plant and fish cultivation. Essentially, this amounts to a symbiotic combination of hydroponics, which is the cultivation of plants in water, and aquaculture, which is raising aquatic animals and vegetables in an aquatic medium.
This new approach in a controlled environment enables him to work in the greenhouse, even with his diminished capacity. “Truth be told, it’s more like a passion than work. For me, it’s a fun game.”

Frédérick explains that it all starts with a tiny seed buried in a little cube of peat moss for the right pH. Nutrients are then added in the form of waste products from the fish, which become dissolved ammonia and transform into nitrite, which is the natural food for plants. The roots absorb the nutrients. “They grow in water on a styrofoam support. The roots can grow without having to work as hard as in soil.” Any excess becomes nitrate, which is not harmful to the fish, which, in Frédérick’s opinion, are the real heroes of the system, the heart of it all.
As Frédérick had mentioned, not two plants are alike in organic gardening. Each one has its own features and is unique. “There is no pesticide, chemical or genetically modified seed involved. Unfortunately, we have been conditioned to accept those products, which are harmful to our bodies,” he comments sadly.
He considers looking after the earth and what is offers a great privilege and an expression of respect for Mother Earth. He feels strongly about setting the example: knowing how to listen, see, observe and then, above all, share. Sharing his know-how and learning the skill, which can’t be done through books. Frédérick learned on the job, drawing on his research and tapping his curiosity.

Frédérick, Guylaine and one of their daughters are now 100% invested in their new store in Bourget, which they called Mag Store & plus. They sell their own organic products and those of 33 local organic farmers, all with the blessing of the Ministry of Health. The Miners see people increasingly going back to nature. “When they come by the store, we see them happy.”
This new recipe for happiness is one that Frédérick shares with anyone he meets, thanks to his love of nature, the people around him and, of course, his family.
“There is no room for selfishness. You have to serve nature. Learn and respect what she gives us and provides to us right here, before our very eyes,” he concludes, serene and smiling.
Magstore web site