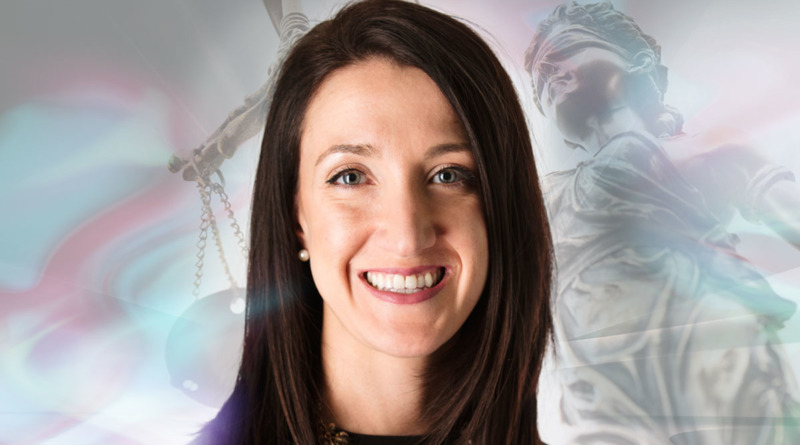 DOING GOOD IN THE NEIGHBOROUD

As a little girl, she dreamed of changing the world, and saving widows and orphans. Her role model? Her mother. Here’s a glance at this young woman’s life so far, a journey on which she never once lost sight of her idea of becoming a lawyer.

Sophie grew up in Curran, with her sister and parents. Dad was an Italian immigrant who worked as a barber, and mom was a Franco-Ontarian lawyer and mother, who held the language of Molière in the highest regard. “But because my father didn’t speak French, at home we spoke English,” she recalls. She learned Italian as a very young child, and went to Italian school on Sundays in Ottawa.

When Sophie started nursery school, her mother quit her job in communications with the government, and remade herself professionally as a lawyer.

“I would often see her studying, and I loved watching her surrounded by all those papers. I would pretend to take notes, just like her. That was when I decided that I would someday become a lawyer, like my mother.”

Eventually the idea took seed in her brain and slowly germinated. The goal was everything for Sophie. Nothing and nobody could have made her change her mind. Before going into law, Sophie signed up for a bachelor’s degree in commerce because she knew that someday she would need it. “My mother always told me to do something I felt passionate about. Commerce is black and white. There are no in-betweens. I love math, the more practical side of things.” She loves everything that has to do with commerce.

Her field of studies
Highly Cartesian, patient and with tremendous strength of character, Sophie took up commerce and emerged with her first bachelor’s degree in hand. With no time to lose, she immediately signed up for law. “When I was in the program, students only needed three years, but now it’s four. After that, you need another three years to get a bachelor’s degree in law.”

Sophie loved her years at university. She graduated with a bachelor’s degree in law, as planned. Then there were a few more steps before you actually become a lawyer. During their mandatory 10-month clerkship in a law firm, candidates do everything that is the exclusive domain of a lawyer, under the supervision of a judicial mentor.

Sophie wanted to practice human rights law in order to possibly work for Amnesty International. She wanted to make her own contribution. “But it’s no easy thing to get a clerkship in a legal firm, so you can’t be too picky. There’s a lot of competition.” The 10-month clerkship that Sophie managed to land in Ottawa ended up taking her on a whole different path. She joined a firm specializing in civil litigation, and acquired experience in that area. It gave her the opportunity to debate different points of view, which was perfect for the future lawyer.

“In university, you have your nose stuck in the books, and you get very little tangible field experience. The clerkship is extremely beneficial.”

“Unlike commerce, law is a gray zone. You go through different arguments. There is more analysis. It took me a little time to grasp the analytical aspect of the profession and the subtleties,” she recalls.

She then had to take the two mandatory bar exams for Ontario. She passed and was called to the bar in June 2009. After five years of working for the same law firm, she felt the need to return to her sources, in her own backyard.

Her practice
Married and with two little girls, she and her family settled in Hammond. She joined a team of lawyers in Rockland, and acquired some more experience. She practiced law there for eight years, after which she opened her own law firm in Rockland, in May 2019, almost ten years to the day after becoming a lawyer.

“I needed to open my own firm to grow even more. I wanted to make my own decisions, I knew which way I was going.” She set up shop in Rockland, simply because that was where she was from, and she wanted to stay true to her community. She had a very specific plan, which was to expand her team. “For now, I have three assistants who work with me. But I plan to add more staff.”

For this 34 year-old lawyer, one thing comes before everything else: her family. That will always be her priority. Despite the long hours she works, Sophie makes a point of always being there for her daughters. “I make it a point to be home for meals with them and to put them to bed. Even if I bring work home, I drop everything to be with my family…and then I work at night.”

Her community
Sophie is also involved with her community. Optimist Club, Chamber of Commerce, …she believes that it is important to take part in things within her territory. And just like when she was a child, Sophie’s older daughter takes competitive dancing. The young lawyer is proud to accompany her to her different competitions.

Her involvement
Three years ago, tragedy hit the Reitano family. In February 2017, Sophie’s mother died from Lou Gehrig’s disease, also known as amyotrophic, lateral sclerosis, or ALS. Since their mother’s passing, Sophie and her sister Christina have been raising funds for ALS. Every year in May, they organize Dance and Move for ALS with the ExtravaDanse Academy in Rockland, where for a while they set everything aside to dedicate themselves to their mother and that horrible disease. “Last year, we collected more than $1,000. We are so touched by people’s generosity. This year, we hope to collect as much again, if not more!”

Sophie never stops. The little girl with a big dream has made it come true. Her vision of her path forward does not include rising in her profession. She is happy with what she does. Her goal is simple, but oh so important: to do good in the world around her.

What would she say to young women who are interested in her profession? “First of all, I would say that law studies are hard, but if they really want to be lawyers, they should stick with it, and never give up. Full steam ahead. Dreams really can come true.”