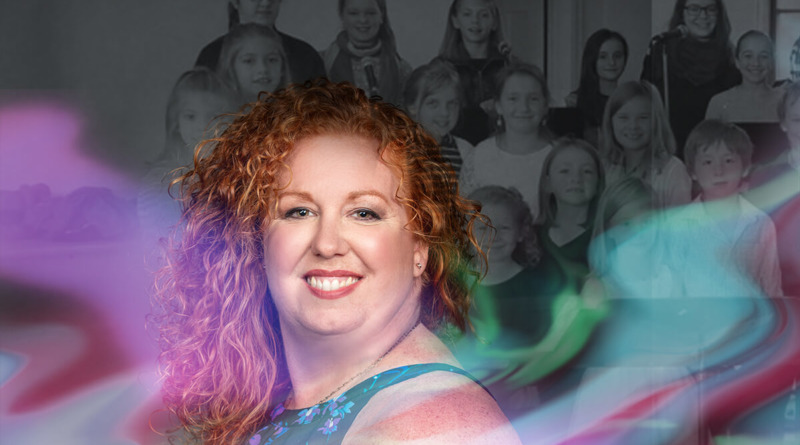 Derrick: Where are you from, Krysta?
Krysta: I was born in Plantagenet. I went to École secondaire de Plantagenet, which is where I met my husband. I now live in Saint-Pascal- Baylon. I love it here, and I never want to live anywhere else.

Derrick: Tell me about your family.
Krysta: My parents still live in Plantagenet. I have two brothers and two sisters. One of my sisters lives in Ottawa. My brothers and my other sister moved to British Columbia to study. Despite the geographical distance, we are a very close-knit family.

Derrick: What did your father do for a living?
Krysta: After high school, my father got a job at E.B. Eddy (Scott Paper) as a technician. He worked there until 2016. My parents met in high school. They married right after they graduated. My mother was a stay-at-home mom, looking after us. She still works from home, but now as a travel agent.

Derrick: What are your family values?
Krysta: Love, listening, being there for one another. Those are the values that keep a family together. We have Christian values, even though not everyone goes to church. Personally, I chose to follow that path. My brothers and sisters are also my friends. That was not always the case. There were times, when we were in high school, when we were not that close. But now, we talk every week to keep in touch.

Derrick: Tell me what you were like when you were a kid.
Krysta: I wasn’t that different from what I am today. I always wanted to please. I enjoyed organizing things, giving of myself and being there for others. Those are the values I got from my parents. I’ve always been social. I like talking and I need to be with people and to talk about things.

Derrick: What is it that motivates someone like you to always say yes?
Krysta: I’m not sure. Maybe it’s because we want to please. It’s not always a good thing, because sometimes we forget to look after ourselves. I had to learn to say no and do things for me. It isn’t always easy. It’s a need that’s deeply ingrained in me. My mother is the same. I’ve always seen her say yes and help others. It might be her influence. I’m not sure. We all have influences in our lives, and given that I’ve always been close to my mother, I sort of take after her.

Derrick: Tell me about your studies.
Krysta: When I was in high school, I served on several committees, and received an award for recreation. So I went to Algonquin College for a degree in recreation.

Derrick: When did you meet your soul mate?
Krysta: I met Christian when I was 16. He was 17. We had the same friends. I had already noticed him, and was waiting for him to make the first move. That happened during a leadership camp. I later found out that he had attended the camp just to be with me. On the way home, he asked me if I would go out with him, and I said yes!

What first attracted me to him was his sense of humour. But we are very different people. We respect each other’s way of thinking. And we see eye to eye on how family chores should be divided and on how to bring up our children. We complement one another and share the same values.

Derrick: What did you do after you finished your studies?
Krysta: I worked for Sears while I was in college, and later got a job at the Nation Golf Club, in the pro shop. Then I became the assistant manager. I quit when my daughter Kassandra was born. After a few years as a stay-at-home mom, I started doing volunteer work at École élémentaire catholique du Rosaire in Saint-Pascal-Baylon, which was where my children went. That got me hooked on the school environment. Over the years I did several things: school lunch monitor, substitute teacher and teaching assistant. I still help out as secretary.

Derrick: You have done a lot for the community. Tell us about your commitment.
Krysta: After Camille was born in 2003, I needed to grow beyond my role as mother. So I started with baptism preparation classes. That was when I started giving my time. I did that for close to 10 years. It gave me the chance to meet lots of people of my age who practiced the faith. My mother-in-law was a strong influence when it came to volunteering. I noticed how much it changed her life and her environment. I told myself that one day I too would volunteer. I get a lot out of it, because when I give, I receive.

I made new friends. I never would have met all those people if I had not volunteered. The Church, the Optimist Club, the choir, which I love…they mean so much to me! Without the parents who are committed to bringing their children to rehearsals and masses, I never would have been able to make a dream come true. I became a role model for my children, all of whom decided to join the choir. It’s a wheel in motion.

My intention going in was never to get my children involved in the community, but now I see the importance of giving. I want my children to be aware of the need to give back. All four of them are members of the JOI Club, which is affiliated with the Optimist Club, and they organize activities at school, and in the community.

“I love to be part of a choir. I love to see real people devoting themselves to God through music.”

Derrick: Tell us about your time on the Municipal Council.
Krysta: For four years, I carried a very heavy load: work, family, volunteer work and Council work. Looking back, I’m not sure how I managed to juggle it all. I now realize that the exhaustion built up. I am proud of what I accomplished, and of having taken that journey. It not only enabled me to do something I had never thought about doing, but also to get out of my comfort zone and to learn about our infrastructures.

Derrick: What does the future hold?
Krysta: I don’t know. My work offers the best of two worlds. I get to organize at the school level, and to be around children. One thing I know for sure, and that’s that I want to keep up the choir work. For the rest, I don’t know what awaits me. I will see where my faith leads me. To be continued!

Derrick: I have no doubt that we’ll be seeing you involved soon.
Krysta: Definitely. I’m not slowing down. I feel strongly about my community, and about volunteering. I like to stay busy and to help. I truly believe that’s where you find meaning in life.