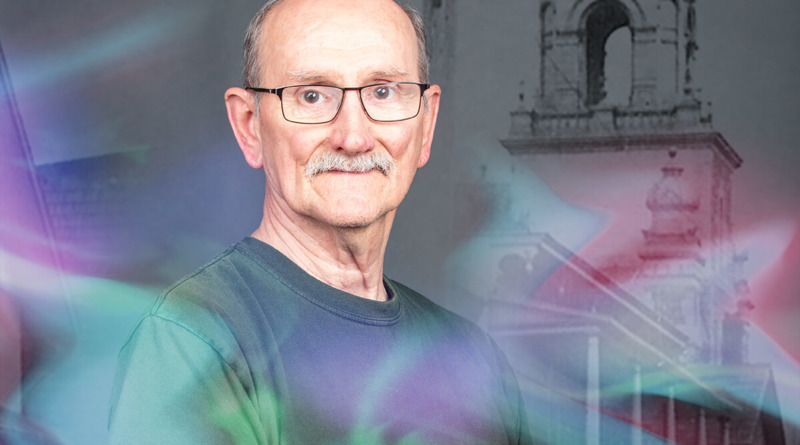 
Stéphanie: Tell us about you. Where are you from?
Gilles: I was born on February 25, 1944, in Clarence Creek. I come from a family of ten children. I am the oldest of eight boys. I have two sisters, one of whom is the oldest, and the other the youngest. Eight boys…poor girls! Actually, had anyone laid a hand on either of them, World War III would have broken out! Fortunately, out in the country, people treated each other with respect, so we never had any problems.

Stéphanie: So you went to country schools?
Gilles : Yes, we went to School Number 16. It was three miles (5 km) from home on Clarence Road next to what is today known as Baseline and Landry. We didn’t walk to school, we ran there. We loved getting there early to have some fun before class. All eight classes were packed into one room. Because I was somewhat frail, the doctor suggested that my parents put off getting me into school. That way, I could avoid having to walk the three miles in the winter. So I did my first grade in three months! They used to call me “the dictionary”. I always love reading and learning. That was how I managed to skip grade 7.

Stéphanie: Did you go to high school?
Gilles: I went to Rockland High School. After graduating, sometime in 1962, I worked as a cashier for the Canadian National Bank in Ottawa. Our offices were across the street from the Château Laurier. After that, I worked for the Caisse populaire Ste-Anne on St-Patrick Street.

Stéphanie: Did you find your soulmate?
Gilles: Yes! Around 1963, I met Nicole at Le Normandie, a dance hall. The hall was across the street from Rockland City Hall. Nicole was one of the prettiest women in Bourget…a lovely redhead! I even remember what she wore that evening: a white blouse and a red skirt. When I saw her, I gathered up my courage and asked her to dance. I was lucky to end up with a good woman. On August 20, 1966, we were married in Bourget’s Église Sacré-Coeur.

Stéphanie: Tell me about your career.
Gilles: My wife Nicole worked for a notary who had more work than he could handle. He managed several businesses, including a general insurance company. He offered me his franchise. I passed the exam and got my insurance licence. I worked in the insurance and financial products field for 42 years.

Stéphanie: How did you reconcile your work and family life?
Gilles: My work required that I meet with clients in the evenings. Nicole put up with a lot, and always backed me up. Just to balance it out, we joined Club Richelieu, and represented it at congresses. That gave us the opportunity to travel and attend conferences in some major hotels, such as the Queen Elizabeth Hotel in Montréal. We were also Amway representatives, which enabled us to do lots of things together, and helped balance things out. My wife was an angel. I was so lucky to have her in my life for all those years. She passed away 11 years ago. Fortunately, she gave me two lovely daughters. They are the living portraits of their mother!

Stéphanie: When you see Nicole in your daughters, do you feel as though she’s still with you?
Gilles: Definitely, and what’s more, I have her portrait up in the museum. She’s watching me to make sure I behave. I’m no longer twenty years old and inclined to get into trouble! Anyhow, I don’t have time for a girlfriend. My commitment to the museum and my other volunteer activities take up a lot of my time.

Stéphanie: Tell me about how you started volunteering.
Gilles: For seven years, I was a volunteer fire fighter, and at the same time worked as a paramedic. I founded a couple of broomball leagues (men’s and women’s) in Rockland. They were the best in Ontario. Unbelievably, one of the teams on our women’s league won the provincial championship for 14 years running. I was involved with the sport at both the local and national levels.
I am also the founding member of the Conseil des arts, de la culture et du patrimoine de Prescott et Russell (CAPRAC).

“Where your talents and the needs of the world meet, there is your vocation.”

Stéphanie: People in the area mostly know you as the guy who set up the Clarence-Rockland Museum. How did that come about?
Gilles: I had been dreaming about having a museum in the area for a long time. Some 20 years ago, I did some research, and realized that the cost would be astronomical. A “real” museum would have been between seven and eight million dollars. I told myself to forget about it. One day, by chance, I was at the St-Joseph Nursing Home in Rockland getting my annual flu vaccination. Afterwards, I had to wait 30 minutes in case there were any side-effects. I got to talking with the widow of Vianney Laporte, the author of, among other things, La petite histoire de Rockland in 1982. We were talking about the gradual disappearance of old buildings in Rockland. I told her that I had heard that there were models representing the old city of Rockland, but that these too had disappeared. To my great surprise, she told me that they were still around, in Hull, in fact, in her brother-in-law’s basement. Dollar Laporte had spent 10 years building those models, and had kept them in storage for more than 35 years. Out of curiosity, I immediately called Mr. Laporte and, once again to my great surprise, it turned out that he had been awaiting my call for some time! He had read a newspaper article about my interest in heritage. So he donated his entire collection!

The first exhibition was at the Cumberland Museum, and lasted six months. The second was at the YMCA for three months. In 2010, the Centre culturel de Rockland closed, and Mayor Richard Lalonde offered me the space for the exhibit. That was the start of the museum.

Stéphanie: What can we find at the museum?
Gilles: A better question would be what can’t you find at the museum! Piece by piece, the museum filled up thanks to donations from people around the region. The museum has more than a million items, including 30,000 books, which I’m still trying to get through! We have more than 2,000 binders with 850,000 to 950,000 pages, photos, documents, pins and maps of the region and the whole world. We have six permanent exhibits. This is a treasure trove of historical and educational material!

Stéphanie: Are you employed by the museum?
Gilles: No, I’m a volunteer, and I wouldn’t have it any other way. When I add up all the hours I am currently putting in, I realize that the City would have to pay me time and a half, and the budget would certainly not be able to handle it! I am fine the way things are.

Stéphanie: What do you see in the future for the museum?
Gilles: We want to set up a non-profit organization. That way the museum could receive donations. We might be able to hire someone to look after it. There are young people who studied in this field at college or university, who would love nothing better. Once you have some working capital, everything is possible.

Stéphanie: How do you see your future?
Gilles: As long as my health holds, I will continue to volunteer at the museum. It’s quite something to love what you do and do what you love.